World Refugee Day is held on 20th June every year. It’s an event organised by the UN to

“commemorate the strength, courage and perseverance of millions of refugees”.

“Displacement linked to climate change is not a future hypothetical –it’s a current reality”.

An estimated 11% of the world’s population, or around 800 million people are now vulnerable to climate change impacts such as droughts, floods, heat waves, extreme weather events and sea-level rise.

With official data from NASA and NOAA showing that 2016 was the warmest year on record and the hottest 10 years ever all occurring since 1998, it’s clear why this is fast becoming such a concern. 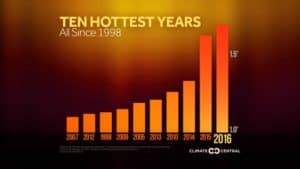 Here in the UK, a report by the Joseph Rowntree Foundation looked at the impact climate change could have on our coastal regions over the next 50 to 60 years. “the total rise in sea levels off the UK coast may exceed one metre, and could potentially reach two metres”. They warn that “the frequency of intense storm events is expected to increase and, along with the rise in sea level, lead to more coastal flooding”. It goes on to estimate that these changes could affect around 30 million people.

Elsewhere in the world, The UN’s Intergovernmental Panel on Climate Change (IPCC) predicts  that some countries, such as Tuvalu, Fiji, the Solomon islands, the Marshall islands, the Maldives and some of the Lesser Antilles could almost or completely disappear under the sea in the next 50 years

Research carried out at the Max Planck Institute for Chemistry and the Cyprus Institute in Nicosia predicts that large parts of North Africa and the Middle East could become uninhabitable over the course of the 21st century due to increases in temperatures, prolonged heat waves and desert dust storms. The region has already seen the number of ‘extremely hot days’, double since 1970. Over 500 million people currently live in this region and the scientist’s predictions are that many will be forced to migrate.

Elsewhere in the world, changes in climate are already forcing people from their homes. Bangladesh for example has suffered 70 climate-related natural disasters in the past 10 years. In many parts of Africa, climate change has meant that traditional crops are no longer viable and food sources are becoming scarce.

Environmental Justice Foundation (EJF) Director Steve Trent states that climate change will “bring about a forced migration on an unprecedented scale, we must take immediate steps to reduce our impact on global climate, and we must also recognise the need to protect those already suffering along with those most at risk.”

Whilst it’s impossible to predict exactly what will happen to the planet over the next 50 years or so, it is clear our climate is changing at a much faster pace than ever before and is already seriously affecting the lives of hundreds of millions of people, many of whom live in some of the poorest countries in the world.

On World Refugee Day, we are encouraged to

“commemorate the strength, courage and perseverance of millions of refugees”.

Let us also today consider some of the changes we as individuals must now make in our own lives to reduce the impact of climate change, for the climate change refugees of tomorrow.

This site uses Akismet to reduce spam. Learn how your comment data is processed.